Some years ago I wrote a series of posts describing how we settled on the FD > 0.9 censoring threshold we're using for the DMCC and some other task fMRI studies. While doing some routine checks yesterday a funny bit caught my eye, which I'll share here as an example of what happens with overt head motion during fMRI, and why censoring affected frames is a good idea.

The first thing that caught my eye was strange, non-anatomical, lines in the temporal standard deviation images for a single run: 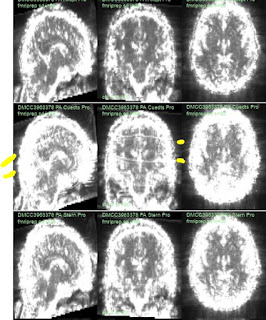 (The above image shows slices through the temporal standard deviation image for three runs from the same participant and session; each row is a separate run. See this post for more explanation and code links.)

The stripy run's standard deviation images are bright and fuzzy around the edges, suggesting that head motion is a on the high side. I looked at the realignment parameters to investigate further (see this post for code and more explanation):

The overt head motion was quite low after the first minute and a half of the run (vertical grey lines are at one-minute intervals), but there were some big jumps in the realignment parameters (and red xs - frames marked for censoring for FD > 0.9) in the first two minutes, particularly around frame 100. (TR is 1.2 s.)

I opened the preprocessed image (via fmriprep; the image's suffix is "_acq-mb4PA_run-2_space-MNI152NLin2009cAsym_desc-preproc_bold.nii.gz") in Mango and stepped through the frames to see the motion directly.

Most of the run looks nice and stable; blood flow is clearly visible in the large vessels. But there's a large distortion in frame 98 (19 in the subset), as shown below (motionExample.nii.gz on the blog osf site is frames 80:110 from the run, for a better view). 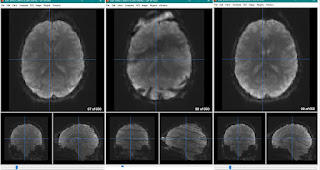 The distorted appearance of frame 98 (center) is expected: head motion changes how the brain is positioned in the magnetic field, and it takes time for the BOLD to restabilize. (Frame 98 is the most obviously affected, but the adjacent also have some distortion.)

It would be bad to include frame 98 in our analyses: the brain areas are not where they should be. This type of error/artifact/weirdness is especially hard to identify in timeseries analysis: we can extract a complete timecourse for every voxel in this run, but its values in frame 98 do not correspond to the same sort of brain activity/BOLD as the rest of the run. Strange values in just one frame can skew the statistics summarizing the entire run, as happened here in the image at the top of this post: the stripes in the voxelwise standard deviation come from the stripes in frame 98.

But, all is actually fine: frame 98, along with several surrounding ones, are marked for censoring, and so will not be included in statistical analyses. The DMCC QC template code that generated the temporal standard deviation images ignores censoring, however, so included the distorted frames, which made the stripes.

To summarize, this post is not describing some sort of bug or error: it is well known that head motion disrupts fMRI signal, and that such frames should not be included in analyses; I am reassured that our censoring procedure properly identified the affected frames. Instead, this post is intended as an example of how a very short head motion can have a large effect on run-level summary statistics. In this case, no harm was done: the run-level statistic is for QC and purposely ignored censoring. But if this frame was included in real analyses the true task-related activity could be lost, shifted, or otherwise distorted; many fMRI phenomena have larger impact on BOLD than does task performance. 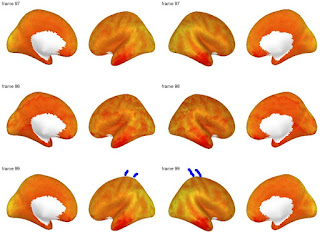 Finally, here's how the same three frames look on the surface. If you look closely you can see that the central sulcus disappears in frame 98 (marked with blue in frame 99 for contrast), though, as usual, I think strange images are easier to spot in the volume. (also via fmriprep, suffix acq-mb4PA_run-2_space-fsaverage5_hemi-L.func.gii, plotted in R.)