demo: transforming from MNI to Talairach (or other atlases)

I generally prefer to spatially normalize to an MNI anatomical template, but sometimes need to work with images that were normalized to a Talairach atlas. This post shows how to warp a NIfTI image (such as a ROI mask) from one space to another. Converting coordinates is a different matter; see  Laird et al, 2010 for more details.

Basic strategy: Use the Normalise function in SPM8 (in SPM12, it's Old Normalise, found in the Batch Editor window under Tools -> Old Normalise), with the Template Image the new atlas, the Source Image the existing atlas, and the Images to Write the mask(s). Then, use ImCalc in SPM to change the transformed mask to the needed dimensionality.

Thus, we need atlas images for both the space we're in (e.g. MNI), and the space we're going to (e.g. Talairach). The atlas images don't need to match in voxel size, but should be similar in overall appearance; for example both skull-stripped (or not), and roughly equivalent brightness. Check that the mask is in the proper location when overlaid on the starting (source) atlas image. 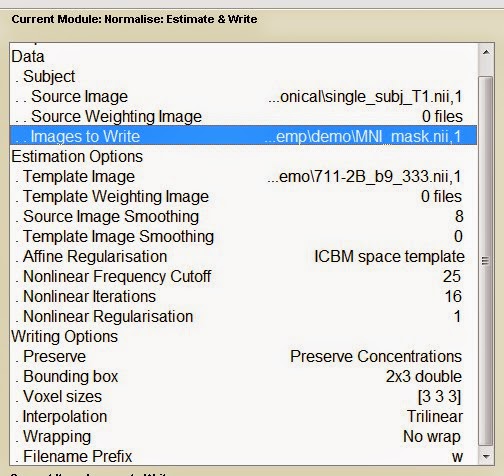 First, warp the image to match the new atlas. Select Normalise: Estimate & Write in SPM8 or Old Normalise: Estimate & Write in SPM12, then add a Subject. Set the Source Image to the atlas image that matches the current space of the mask (MNI, in this example), and the Template Image to the atlas image that matches the new space (here, Talairach). Set the Images to Write to the mask (here, aligned to the MNI atlas), and set the Voxel sizes to the desired output size (here, 3x3x3 mm). Running the function produces files named like the Images to Write, but with the Filename Prefix prefixed.

If the output image looks ok, check the NIfTI header parameters (e.g. in MRIcroN). Most likely, they will not be exactly what you need. For example, I need my Talairach-ed mask to precisely (bounding box, orientation, voxel size) match some functional images. ImCalc in SPM will do this final transformation. 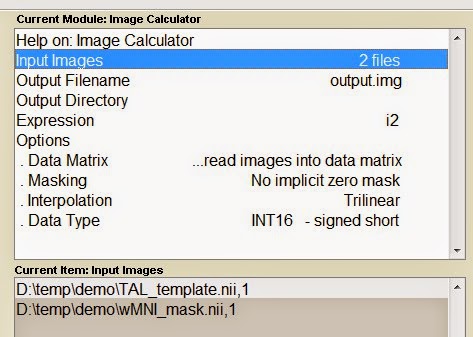 For ImCalc we need an image to match: one with the NIfTI header information we want the mask to have (it's ok if the template is 4d and the mask 3d). In this case, the functional image (aligned to the Talairach atlas) is TAL_template.nii. Set two Input Images: first, the template, then the mask (here wMNI_mask.nii, the output from Normalise); see screenshot. The order is important: ImCalc will change the second image to match the first, writing a new file Output Filename. Set the Expression to i2. 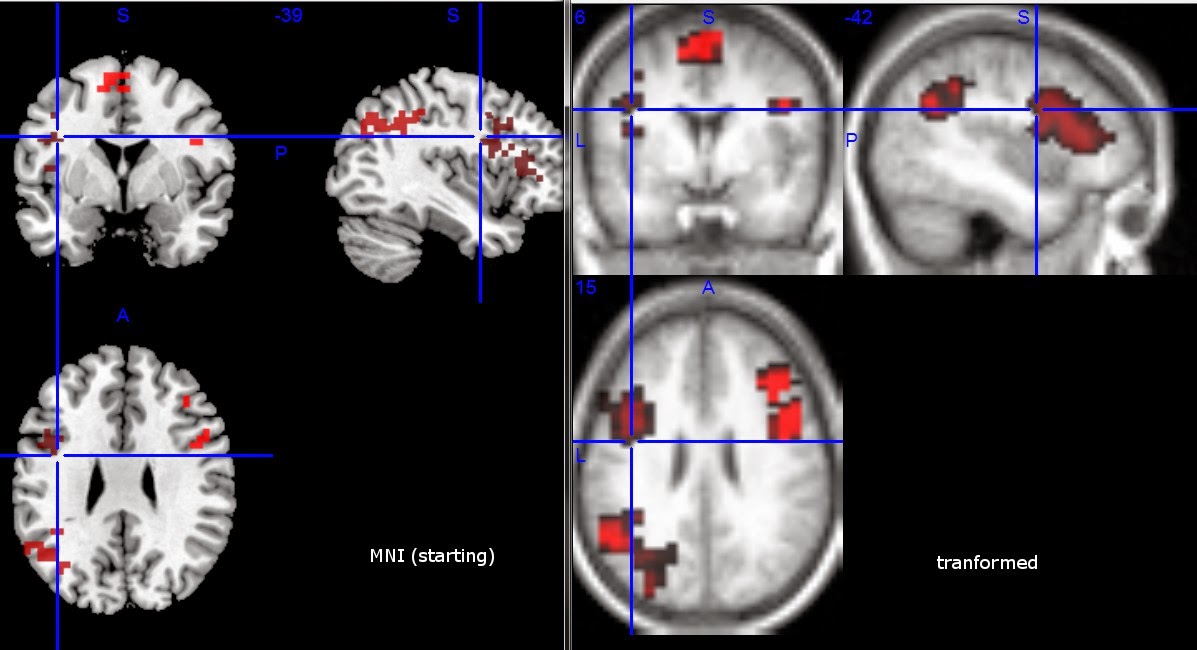 Finally, compare the original and transformed masks for alignment. Here, I show them both on anatomic images. The original mask had integer values, which have been "blurred" by the warping. I generally correct such blurring manually in R, such as by rounding the voxel values, and then changing individual voxel values as needed to fine-tune the transformed mask. How much fine-tuning is needed varies, depending on the degree of transformation required, initial mask image, etc.

I've found that this combination of Normalise (Old Normalise in SPM12) and ImCalc usually transforms masks well enough that relatively little manual adjustment is needed. Please share if you know of any alternative (or better!) procedures.

UPDATE 24 May 2016: afni 3dresample  can also be used.
UPDATE 18 May 2015: wb_command -volume-affine-resample can be used to do resampling.
UPDATE 26 January 2016: Added a note that these instructions show the Normalise function in SPM8, which is Old Normalise in SPM12.
Posted by Jo Etzel at 9:50 AM No comments: