Several years ago I wrote a post on how to extract timecourses from HCP CIFTI files. That works, but newer versions of wb_command (I'm using version 1.2.3) have added functions that provide a simpler method.

Here's the situation: I want to extract the vertex-wise values corresponding to a specific Gordon parcel from a CIFTI COPE generated by the HCP, saving the values into a text file. Note that I don't want to do averaging or any other calculations on the vertex values - just extract the values.

Short version: convert both CIFTI dtseries files to text using wb_command -cifti-convert -to-text, then use the indices of the rows with the desired Gordon parcel number to get the correct vertices from the COPE file.

The values I want are the COPEs the HCP generated from fitting the GLM; images like /SUBID/MNINonLinear/Results/tfMRI_WM/tfMRI_WM_hp200_s2_level2.feat/GrayordinatesStats/cope2.feat/pe1.dtseries.nii. Since these are parameter estimate images, they're not timeseries, but a single full-brain image. I want a vector of numbers (same length as the number of vertices in the parcel) for each COPE.

(On my windows box I open a command window in the directory containing wb_command.exe, and include the full path to the input and output files to avoid path issues.)

The commands should have generated two files, each a column of numbers. cope1.txt has 91,282 rows (cortex and subcortical structures), Gordon_Parcels_LR.dtseries.txt has 59,412 rows (cortex only). From what I can determine, the cortex is the first 59,412 rows of the 91,282 row CIFTI, and the vertex order is the same between the two. 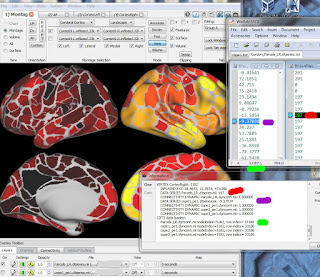 This image shows a way to confirm the correspondence of values in the files. I have both Parcels_LR.dtseries.nii and cope1_pe1.dtseries.nii loaded in Workbench, with the parcels displayed. The two output text files are in the WinEdt window at the upper right of the screenshot; the cope on the left and parcels on the right.

I clicked on a spot in the right hemisphere, SMmouth parcel (little white marker), making the Workbench Information window appear (lower right of the screenshot). The green lines mark that the spot I clicked is row index 33186 in the CIFTI data. This is 0-based, so its values should fall in row 33187 in the 1-based WinEdt window; the blue pointers show this row in each file. The values match: the purple lines mark that this row in cope1.txt is -9.37034, same as the DATA SERIES cope1_pe1.dtseries.nii line of the Workbench Information window. Similarly, the row in Gordon_Parcels_LR.dtseries.txt is 197, same as the DATA SERIES Parcels_LR_dtseries.nii line in the Information window (red lines).

So, that's it: to get my vertex values, all I need to do is subset all the rows from cope1.txt that have the parcel number I want (e.g., 197) in Gordon_Parcels_LR.dtseries.txt.
Posted by Jo Etzel at 3:13 PM 4 comments:

This is the third post in a series, which started with what we were aiming for with the censoring, then how we implemented it for a dataset. Here, I'll show an example of how the censoring changed the GLM results. The GLMs were run in afni, using 3dDeconvolve and TENT functions; the task timing is a complex mixed design (trials embedded in blocks), so the model has both event-related and block-related ("sustained activity") components.

Setting our censoring threshold to FD > 0.9 removed very few frames; less than 2% in most runs, and never more than 12%. I wondered if such a modest amount of censoring would have a noticeable impact, but it looks like it did (which is a bit of a reminder of GLM sensitivity, but that's another issue).

Here's an example person. In the Stroop task for this person 1 frame was censored in the Bas session, 15 in the Pro, and 0 in the Rea. There are more than 1000 frames in each session, so this is not many ant all. The acquisition was with the MB4 paradigm, so we have a pair of runs (AP - PA encoding) for the task each session. Here are motion and FD traces for the person, the Pro session (highest censoring); this is a pretty good set of traces, with the biggest spikes censored at FD > 0.9 (red x). 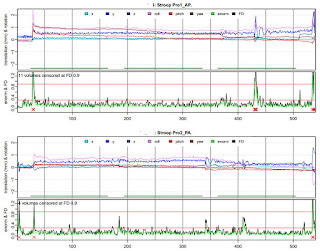 Now, here are F-statistic images for the same task and person, for the sustained ("block") effect from a GLM. The no-censoring image is first, followed by the with-censoring image. The first row for each is the Bas session, followed by Pro, then Rea; the color scaling is the same in each.

The third (Rea) row is identical in the two images: no censoring (so they better match, since each session went into a separate GLM). The top rows (Bas) look very similar, though the peak values (rng in upper right) vary slightly. The second row (Pro), with the 15 censored frames, varies quite a bit between the two. I found the area marked with the blue arrows particularly interesting: the white matter is much brighter in the no-censoring version, and this white-matter pattern isn't present in the other (less spiky motion) runs, and looks very much like an artifact (not BOLD-ish); particularly the k=44 slice.

Similar effects are seen in the TENTs: high-motion people and sessions tend to have spikier (and less HRF-like) shapes, which is ameliorated a bit by the censoring. There seems to be a bit less ringing with censoring, as well. So, while these are preliminary, qualitative assessments, I'm encouraged that this small amount of censoring may be sensible.
Posted by Jo Etzel at 5:33 PM No comments:

In the previous post I showed some plots of motion regressors (with enorm and FD) from an ongoing study, with qualitative descriptions and examples of the sort of motion we're seeing. In this post I'll describe some of the literature about motion censoring for task fMRI, and how we decided to implement censoring for this study.

Probably the most directly relevant recent paper for censoring task fMRI datasets, and the one whose recommendations we're broadly following, is Siegel, et. al (2014). They explored the effects of censoring on three datasets at various FD thresholds. As is reasonable, given the great variations in experiments, they refrain from making "universal recommendations", but do provide useful summaries and guidelines.

As in most things, there's no free lunch with censoring: increasing the amount of censoring reduces the number of trials available for response estimation, but hopefully lets those estimates be more reliable. Siegel, et. al (2014) found that a threshold of FD > 0.9 did well in many cases, and generally suggest fairly light censoring - removing the highest-motion frames, not every frame with any movement (see the Discussion section, page 1994). Further, they suggest removing only the above-threshold frames, not adjacent frames (page 1992):


"In a one-factor ANOVA, the FD > 0.9, (f0, b0) mask produced significantly higher zscores than all of the other masks except FD > 1.1 mm (f0,b1) which was not significantly different. On the basis of these results, we do not recommend removing volumes proceeding or following high-motion volumes ..."

Siegel, et. al (2014) didn't attempt to interpolate censored frames, citing the difficulty in accurately interpolating gaps of more than one TR. This strikes me as reasonable, particularly in task designs, where, depending on the analysis, it may be best to simply omit trials with above-threshold movement.

Setting the censoring threshold for any particular study is at least partially subjective, which is unfortunate, given the already-too-many experimenter degrees of freedom. We decided to see if the FD > 0.9 threshold suggested by Siegel, et. al (2014) seemed reasonable: did it capture rare spiky motion, but not oscillations? What percentage of frames were censored? This effort is what let to the images in the previous post: I marked the censored frames on plots of each run's motion, and we judged whether the marked frames seemed reasonable. In our case, no run had more than 12% of the frames censored, and most had less than 2%, so we decided to proceed with the FD > 0.9 threshold.

Looking at papers citing Siegel, et. al (2014), I found one using FD > 0.9 for censoring (Davis, Goldwater, & Giron, 2017), one with FD > 0.8 (O'Hearn, et. al, 2016), and one with FD > 0.5 (Bakkour et. al, 2017). Others mention censoring for motion, but without giving details, and I've heard people mention censoring based on standard deviations of the estimates within the particular dataset. Censoring based on enorm values is pretty similar to the FD used by Siegel, though afni tends to recommend a smaller threshold, such as 0.3, for adult task fMRI. I don't have time to compile a summary of common enorm-based thresholds, but would be interested if someone else finds or creates one!

A final consideration is whether to use only censoring, or censoring plus having the motion estimates as nuisance regressors in the GLM. As summarized in Siegel, et. al (2014), page 1992:

We are currently including 6 motion regressors in the (3dREMLfit) GLMs, plus omitting the censored frames. We might need to reevaluate that choice at some point; we did a bit of looking at including more regressors, but haven't previously considered using only censoring.
Posted by Jo Etzel at 5:22 PM No comments: