The key is where and how the mean-subtraction and/or normalization is done. Using the row- and column-scaling terminology from Pereira, Mitchell, and Botvinick (2009) (datasets arranged with voxels in columns, examples (trials, frames, whatever) in rows): the mean pattern subtraction warned against in Walther et al. (2016) and Garrido et al. (2013) is a particular form of column-scaling, not row-scaling. (A different presentation of some of these same ideas is in Hebart and Baker (2018), Figure 5.)

Here's my illustration of two different types of subtracting the mean; code to generate these figures is below the jump. The original pane shows the "activity patterns" for each of five trials in a four-voxel ROI. The appearance of these five trials after each has been individual normalized (row-scaled) is in the "trial normalized" pane, while the appearance after the mean pattern was subtracted is at right (c.f. Figure 1D in Walther et al. (2016) and Figure 1 in Garrido et al. (2013)).

Note that Trial2 is Trial1+15; Trial3 is Trial1*2; Trial4 is the mirror image of Trial1; Trial5 has a shape similar to Trial4 but positioned near Trial1. (Example adapted from Figure 8.1 of Cluster analysis for researchers (1984) by H. Charles Romesburg.)

And here are matrix views of the Pearson correlation and Euclidean distance between each pair of trials in each version of the dataset: 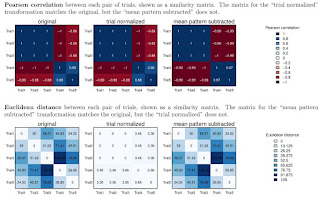 This is another case where lack of clear terminology can lead to confusion; "mean pattern subtraction" and "subtracting the mean from each pattern" are quite different procedures and have quite different effects, depending on your distance metric (correlation or Euclidean).