RSA: how to describe with a single number? 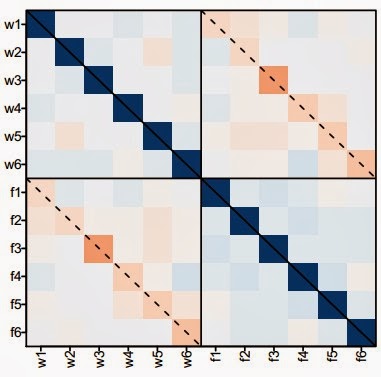 RSA (Representational Similarity Analysis) can make very pretty matrices, but sometimes we want to describe the RSA matrix by a single number.

For example, at left is an RSA matrix for a dataset with six examples in each of two classes (w and f). The matrix was calculated from a single ROI and person, using Pearson correlation. Following convention, dark blue indicates correlation of +1 and red, correlation of -1.

Concretely, the darkest-red cell (f3-w3) shows that the activity in the ROI voxels on trial f3 was negatively correlated with the activity on trial w3.

We can see that this matrix is sensible: there is more blue (positive correlation, greater similarity) in the w-w and f-f cells than the w-f cells. Restated, the activation in the ROI's voxels was more correlated (less dissimilar) on trials of the same type than on trials of different types, as we'd hope.

But what if I want to describe this matrix with a single number, for example, so that I can see if the RSA produced similar results to classifying w vs. f with a linear SVM (e.g., do people with higher accuracy have a more blue-and-red RSA matrix)? 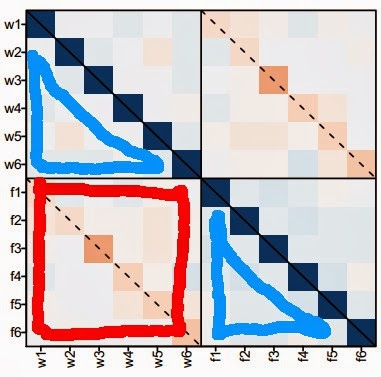 Logically, if the same-type trials are more similar than the different-type trials, this average-the-triangles-then-subtract measure will produce a positive value, with larger values being a "better" RSA.

(Note: I generally calculate Pearson correlations, then use the Fisher r-to-z transform before before and after mathematical operations, but left that out of the text so far. The exact method needed will of course depend on the (dis)similarity metric employed.) 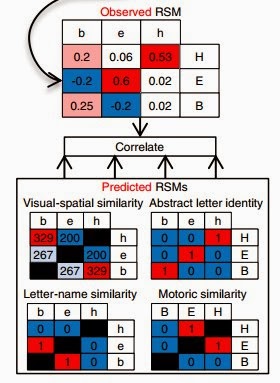 Reading some papers today, I realized that this triangle-averaging-and-subtracting method is a special case of a technique that's been written up a few times, and which Pereira & Botvinick 2013 called generating a "similarity structure score". The same general strategy was followed in Rothlein & Rapp 2014, who summarize it neatly in their Figure 2, which I copied a bit of at left. (full citations below)

The key idea is that you first create what Rothlein calls a "predicted RSM" (and Pereira a "similarity structure scoring matrix", and me a "template"): a matrix the same shape as your RSA matrices, but filled with -1, 0, or 1, reflecting the (RSA matrix) pattern you're testing for. You then calculate a score for how much each real RSA matrix matches the template RSA. Rothlein 2014 calculates the Pearson correlation, Pereira suggests a few different techniques. 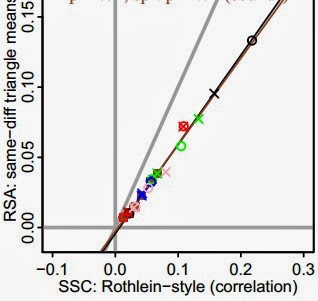 I was curious to compare the statistics produced by the different methods, so calculated a "similarity structure score" using my triangle-averaging-and-subtracting version and Rothlein's Pearson correlation-based method, in both cases using template matrix has +1 for all same-type cells and -1 for all different-type cells. The result is at the left.

The different plotting symbols and colors indicate different ROIs, and the thin lines are linear regression lines through the two stimulus sets in the dataset (details don't matter here). The thick grey lines are for x=0, y=0, and x=y.

It's clear that the similarity structure scores produced by these two methods are highly correlated, with the Pearson correlation producing numerically larger values. I don't see a big reason to pick one method or another in this case; the decision could have quite a bit more impact in other cases, such as when the template matrix is sparse (lots of zeros). 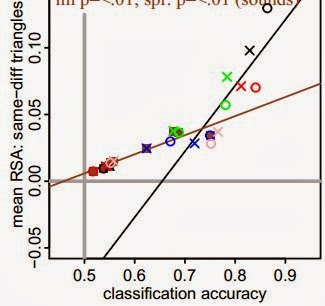 So, at the top of the post I used a motivating example of wanting to see if the RSA produced similar results to classifying w vs. f with a linear SVM ... did it? Yes.

Interestingly, there is a tight linear correlation between the accuracy and RSA scores within each stimulus type, but not across types. Looking at different parts of the dataset, I don't think this is a non-linear relationship (e.g. larger RSA values at higher accuracies) but rather that the different stimulus types actually have different regression slopes. But I'd be curious to hear if anyone has done these sorts of comparisons in a more rigorous manner.

code snippet: extracting weights from the linear svm in R

Here's a few snippets of code, showing how to extract the weights, decision hyperplane, and distance to the hyperplane from a linear SVM fit in R (e1071 interface to libsvm).

The setup: train.data and test.data are matrices with examples in the rows and voxels in the columns (i.e. two non-intersecting subsets of the entire dataset, making up a single cross-validation fold). The first column in each (named "target") contains the class labels, and the rest of the columns ("vox1", "vox2", ...) have the BOLD activation values.

pointer: "A discussion of causal inference on fMRI data"

In case you missed it, there's a very interesting discussion of DCM, GCM, and causal modelling in general on Russ Poldrack's blog.

I've never dug properly into these methods myself, partly because I'm busy enough with MVPA methods, but also from quite a bit of skepticism that they are mature enough to be reliably interpretable at the moment. Their discussion added detail to some of the things I've been generally skeptical about, and is a must-read for people thinking about starting with causal modelling of fMRI data.
Posted by Jo Etzel at 10:43 AM No comments: