After my initial "what is this?" post I've become convinced that the oscillations are due to respiration, both from my own data and others' reports. I'll leave it to the physicists to understand why the patterns are especially prominent in these sequences, but I've been trying to understand their impact for our work: we're collecting task data and want to do event-related and FIR analyses. Is the oscillation something superimposed on (but independent of) our real signal such that we can "ignore" or process it out (maybe with signal separation techniques such FIX ICA) after image collection, or is our event-related BOLD getting lost, and we should change the acquisition parameters?

These images show some of the plots I've been playing with to try evaluating those questions, using HCP data for comparison. The x-axis is frame number, with thick vertical grey lines marking one-minute intervals and thin vertical grey lines marking 30-second intervals. The left-side y-axis is translation in mm (from the Movement_Regressors.txt file), while the right-side y-axis is the average BOLD of the voxels in each parcel (which I generated via afni; details below; these are the minimally preprocessed images). Note that the left y-axis (translation) is fixed in all graphs while the right-side axis (activation) varies.

The first three columns of Movement_Regressors.txt are plotted in light green, light blue, and light red (in that order), with the average activation overlaid in black (right-side axis). The dark blue line that tracks the activation is a lowess smooth. I generated these plots for four HCP people, in each of four Gordon parcels (4, 41, 45, 201), and for six task runs (MOTOR, GAMBLING, and EMOTION, RL and LR of each). I chose those task runs because they all involve hand motion, blocked (MOTOR) or as event responses (GAMBLING and EMOTION). The block or button-push time is shown in the graphs as little tick marks along the x-axis, with R and L marking the right and left-hand block onsets for MOTOR. I picked four parcels of similar size; 45 is in the left-hemisphere and 201 in the right-hemisphere SMhand communities, and should show strong hand-motion-related activation.

Plots for all four people, runs, and parcels are in this pdf, with two sets copied in here. These are plots for the four parcels, the MOTOR_RL run only. The purple lines show when we expect hand-motion task activation to be strongest for parcels 45 and 201, and it is, particularly in the smoothed line (good, signal!). The oscillation is also clearly visible, and related (by my eye, at least) to the pattern in the motion regressors. There are also spikes, some of which I marked with red dots. It's a bit hard to see in these plots, but these spikes strike me as aligned to jags in the motion regressor lines (and presumably, respiration). 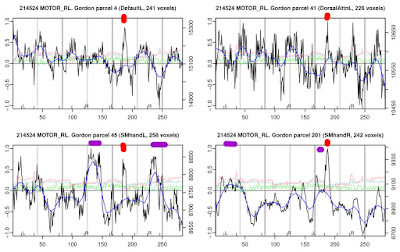 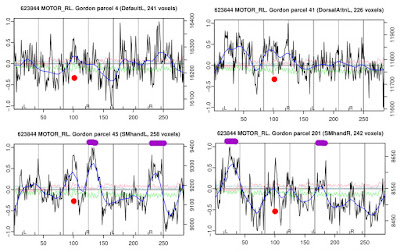 Looking at a lot of these plots makes me understand why I've had trouble (in the other dataset as well) with single-TR and short temporal-compression analyses (e.g., averaging 4 or 5 TRs after an event): I'm picking up too much of the oscillation. Signal clearly is present here, but trying to detect it for single (or short) events is proving tricky.

(example afni command after the jump)

In the previous post I showed some motion regressors with very regular oscillations. Several of you pointed towards respiration, and I was able today to extract the signal from a respiration belt for a couple of runs. The respiration signal (black line plots) is not perfectly temporally aligned to the movement regressors, but close enough to convince me that respiration is driving the oscillation. We're still looking into various acquisition details for why it is so prominent in this dataset; I am certainly not an MR physicist, but will summarize when we figure something out. 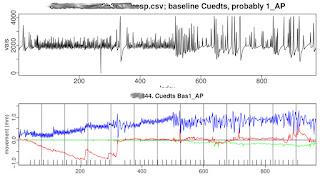 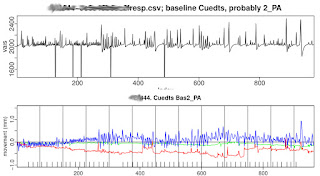 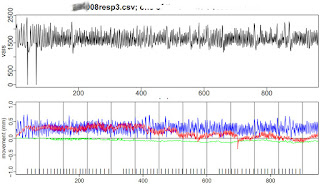 UPDATE: This pattern is related to respiration.

Some of the participants have an oscillation in the movement regressors, and I would love to get your impressions of the pattern. Below are two runs (encoding directions AP and PA) of a task for the participant with the most striking oscillation. Plotted are the six columns (translation in blue, rotation in pink) generated by our implementation of the HCP processing pipelines (the Movement_Regressors.txt file, to be precise; MCFLIRT produces a nearly identical set of values). Acquisition frames are along the x-axis, with vertical lines marking 1 minute intervals (these runs are a bit more than 12 minutes long), and short tick marks indicating event onsets (the events are in three blocks). 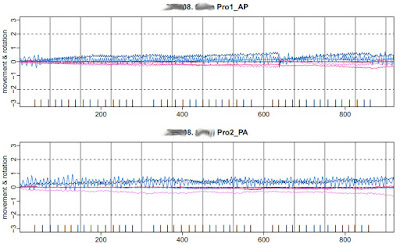 The overall motion is quite small: less than a mm over each run, well under the 2 mm isotropic voxel size. But the second column (blue below) has a very clear oscillation, that strikes me as too regular to be physiological in origin. Below are the same values again, but just the translation columns, zoomed-in.

This movement is not a simple bug in the preprocessing, but is visible in the raw (converted to NIfTI and defaced, but not motion-corrected, spatially normalized, or anything else) image (click here to see a movie of 08's Pro1 run). It's also in the voxel intensities. The graph below has the same column 2 translation values as the Pro1 graph above, with the average frame-to-frame intensity of a 1900-voxel box-shaped ROI I put in the frontal lobe superimposed in pink. The two curves clearly track pretty well.

I've never seen movement like this in non-SMS EPI datasets, and its regularity makes me suspect that it's related to the acquisition somehow. I'm certainly not a physicist, so very much would appreciate any insights, or if you've encountered similar movement.

The person whose images are shown in this post has the largest and most regular oscillation of any person we've scanned yet (around 8 people); check below the fold for a few more examples, along with details of the acquisition sequence.