I haven't yet tried running PRoNTo, but have heard some positive things. Definitely worth a look if you're looking for MVPA software, particularly if you're using SPM and MATLAB.
Posted by Jo Etzel at 4:28 PM No comments:

Email ThisBlogThis!Share to TwitterShare to FacebookShare to Pinterest
Labels: announcements, getting started

"jumping stars": a side effect of low power

In brief, statistical power refers to the long-run frequency of rejecting H0 and accepting H1 (if the experiment was repeated), when the truth is that the effect exists - the null hypothesis should be rejected. Unfortunately, psychological and neuroimaging studies tend to be underpowered. There are plenty of practical and historical reasons for this, see the references listed below for readable introductions.

In this post I'll demonstrate one side effect of low-powered studies: reproducing results can be very difficult, even when the effects actually exist. I sometimes refer to this effect as "jumping stars", for reasons that will become apparent. This example is adapted from one presented in Maxwell (2004).

Once we have the data, we do a multiple linear regression to see which competence areas are most related to the depression score. (The variables are scaled in such a way that positive regression coefficients imply that higher levels of perceived competence correspond to lower levels of depression.)

For concreteness, here's the data for the first few (pretend) people:

Now we do the linear regression, and get the following: 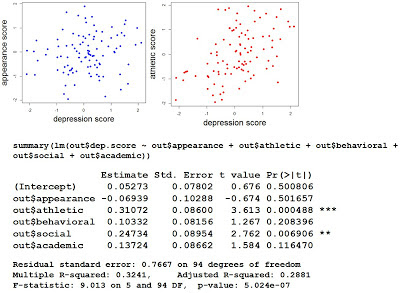 What can we conclude? Well, it looks like higher levels of athletic and social perceived competence are associated with lower levels of depression. These p-values are quite good, surviving even a Bonferroni correction for multiple comparisons.

Now, someone decides to replicate our study, and measures depression and self-perceived competence in 100 different people. They got this result from the linear regression:

And another study's results:

Oh no! Things are not replicating very well .... to summarize:

What happened? As you probably guessed from my introduction about power, these three studies are not "bad" or finding non-existent effects, but rather are underpowered.

These three datasets were created when I ran the same simulation (R code here) three times. The simulation creates an underpowered study in which the factors are equally important: all five measures are correlated at 0.3 with the depression score.

Thus, all factors should be found equally important. But we don’t have enough power to find them all, so we only find a few in each individual study. The results of each study are thus not exactly incorrect, but rather incomplete, and unstable: which effects were detected in each varied randomly.

And that is why I refer to this effect as "jumping stars": which row of the results table gets the stars (is found significant) varies as it is repeated; the significance stars seem to jump around unpredictably.

There is no easy fix for the jumping stars problem, since it's due to the hard-to-solve problem of low statistical power. And it can be quite difficult to distinguish this situation - true effects but low power - from a situation in which replication fails because the effects are nonexistent (due to random chance).

All of this can add up to a messy, unstable, contradictory literature in which replication is very difficult - even if the effects actually are present!

But I am not counseling despair, rather awareness and caution. We must be very, very cautious in interpreting negative results; aware that many true effects could have been missed. And we should keep power in mind when designing experiments and analyses: more is generally better.

Sedlmeier & Gigerenzer, 1989. Do Studies of Statistical Power have an Effect on the Power of Studies?