The call for papers for the 3rd International Workshop on Pattern Recognition in NeuroImaging (June 22-24 University of Pennsylvania, Philadelphia PA, US) ends on 27 March 2013.
Posted by Jo Etzel at 5:05 PM No comments:

It occurred to me that functional connectivity is sort of like RSA (representational similarity analysis): calculating a bunch of distances (Pearson correlation, often), but over timepoints (e.g. volumes) instead of voxels.

The sketches show how one cell of the dissimilarity matrix or one functional connection is calculated. I use "BOLD" in a loose sense; the signal has of course been scaled, etc., but the plotted values do derive from  "activation" as measured with BOLD.

I can make a similar sort of picture for linear SVM classification: 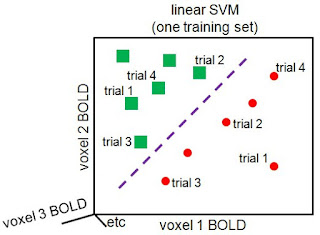 but it's quite a bit different. With classification we're analyzing (often) the test set accuracy which comes from testing the fitted classifier (represented by the purple dashed line) with new data. But with functional connectivity and RSA we're working with the correlation (or whatever distance metric) more directly, interpreting how related the BOLD is between two regions (over timepoints) or between two trials (over voxels).
Posted by Jo Etzel at 10:51 AM 1 comment: