"The effect of spatial resolution on decoding accuracy in fMRI multivariate pattern analysis" by Gardumi et al. (full citation below) is an impressive methodological tour de force: comprehensive analyses clearly described (even their group-level permutation scheme!). Some of its themes are similar to those by Coutanche, Solomon, & Thompson-Schill (2016) which I posted about yesterday: understanding the spatial scale of fMRI information.

The approach in Gardumi et al. (2016) is different than that of Coutanche et al. (2016): they started with 7T images acquired with 1.1 mm isotropic voxels, then reconstructed the images at 2.2 and 3.3 mm effective resolution as well, by zero-padding the k-space images, as illustrated in their Figure 1, below. 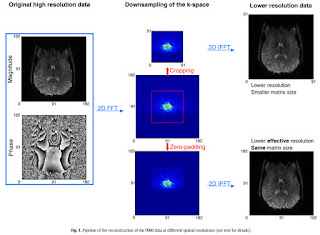 A neat part of this approach is that the resulting images have the same voxel size, but lower effective resolution, making it possible to directly compare analyses including the same number of voxels (which is good, since MVPA performance generally interacts with the number of voxels). Changing the effective resolution this way also avoids the issues related to differences between acquiring 1.1 and 3.3 mm voxels (e.g., movement sensitivity): only a single scanning session was used for each person.

Another interesting aspect is that they had two classification tasks: decoding the speaker or the spoken vowel (see paper for details; they used auditory stimuli and single-subject-defined auditory anatomical ROIs). One of their results summary figures is below (lots more detail in the paper!), showing group-level average accuracy for the two classifications at each effective resolution. As an aside, the x-axis is the number of voxels included, picked from univariate tests (n most active voxels from training set GLM): accuracy increased for both until around 1000 voxels were included, then leveled off (again, see the paper for details), which matches my general experience of plateauing performance (e.g.). 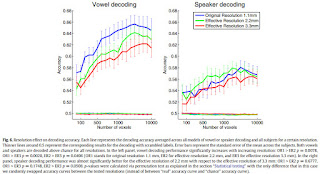 Anyway, Figure 6 (plus other tests that they describe) shows that smaller voxels generally did better for their vowel decoding classification, but not for speaker decoding. In the discussion Gardumi et al. (2016) ties this to previous literature findings "that informative voxels in the auditory cortex are widely distributed for vowel decoding, while more clustered for speaker decoding."

Yesterday I wrote that I'm not "convinced that it's safe to infer information spatial resolution from voxel resolution" ... am I convinced by Gardumi e al.? Yes, I think so. Below is my cartoon for how it could work. The blue squares are the brain region, the white circles informative parts, and the red squares voxels at two different sizes. Suppose that you need around a quarter of the voxel to be informative for its activity to be biased (and so contribute to a classification): this is much easier to obtain with small voxels than large ones if the informative parts are widely distributed (left), but about as easy to obtain with both small and large voxels if the informative parts are clustered (right). 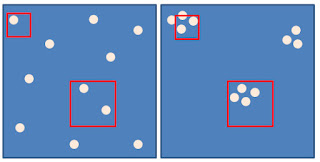 So, I now am thinking that it can sometimes be valid to make inferences about the spatial distribution of information from comparisons across voxel resolutions. The way in which the different voxel resolutions are obtained strikes me as very important: I have a lot more reservations about inferences when the resolutions are generated by different acquisition sequences than by k-space zeroing. And perhaps some of my change of heart is due to the different mental models I have of "widely distributed" or "clustered" information as opposed to "coarse" or "fine-grained" spatial resolution. Both of my cartoons above have 10 informative bits (circles): would you describe the one on left as fine-grained and the one on the right as coarse-grained?

A (fairly) recent paper from Coutanche, Solomon, & Thompson-Schill, "A meta-analysis of fMRI decoding: Quantifying influences on human visual population codes" (full citation below), has an interesting approach to the effort to understand the spatial scale at which information is present in fMRI signals.

Coutanche, Solomon, & Thompson-Schill 2016 describes a meta-analysis of visual MVPA studies, the details of which (and most findings) I won't get into here. But I do want to highlight their use of the different spatial resolutions (acquired voxel size) across studies to get at spatial resolution. In their words,


"Multi-voxel decoding should be optimized (all else being equal) when the voxel size of acquired data matches the spatial resolution (i.e., granularity) of a region's information-containing patterns. We hypothesized that if V1 holds a more fine-grained map of information than later visual regions, employing larger voxels should not benefit decoding in V1, but may benefit decoding in post-V1 regions (through greater signal-to-noise at the scale of these patterns). .... Naturally, at a certain point, increasing the voxel size is expected to impair performance for any region."


"The results of our regression analyses supported this: using larger voxels improved decoding in V2 (B=0.01, p=0.049), unlike V1 (B=0.002, p=0.451). ... These findings are consistent with later visual regions holding coarser multi-voxel codes, while V1 relies on fine-grained patterns."

The "all else being equal" does a lot of work, since there are major interactions between acquisition parameters and the signal-to-noise in the resulting functional images (I'm far from convinced that using voxels around 2 mm isotropic or smaller is a good idea for general task fMRI, but that's another topic!). But if I take as a starting assumption that we have equally good signal-to-noise across a sensible range of voxel sizes, do I accept that decoding should then be optimized "when the voxel size of acquired data matches the spatial resolution (i.e., granularity) of a region's information-containing patterns"?

The idea that, "at a certain point, increasing the voxel size is expected to impair performance for any region", strikes me as plausible: if the voxels are large enough to encompass the entire region, only the average activity of the region as a whole can be used in the analysis, losing any information contained in within-region activation patterns. However, no brain region exists in a vacuum - they are surrounded by other brain structures - and fMRI voxels don't have sharply-defined edges, so in practice, too-large voxels will have signal from adjacent regions, and the combination of regions might have quite a lot of information.

Overall, I accept that idea that voxel size could be used as a marker of spatial resolution in the abstract: a fixed (unmoving, not surrounded by other regions) region and equally good signal-to-noise across the range of voxel sizes. In actual fMRI datasets, I'm not as convinced that it's safe to infer information spatial resolution from voxel resolution, but it is an intriguing idea.