yet more with respiration and motion regressors

Last year I did a series of posts on our experiences with multiband (SMS) task fMRI, particularly related to the respiration-related oscillations that are very apparent in the motion regressors of some people. See also practiCal fMRI's posts, especially this one. The tests and analyses here extend those, and convince me that the oscillations are not due to actual head motion, but rather B0 modulation or something else related to chest motion and/or blood oxygenation ("apparent head motion").

These scans are all using this previously-described MB4 acquisition sequence, and an experienced test person with rather prominent respiratory oscillations (the same person is in these first two plots) but little overt motion. We've been evaluating using Caseforge headcases to reduce movement and ensure consistent head positioning in the headcoil. We have two Caseforge headcases for this person: one fits quite tightly, and the other a little looser. This gives a set of comparison runs: with foam packing only (allowing more movement); with the regular Caseforge (some, but not much, movement possible); and with the tight Caseforge (motion essentially impossible).

The plots below show the 6 motion regressors (calculated from SPM12's realignment) and raw respiration signal (with a Siemens belt). I'm pretty confident that the motion regressors and respiration are precisely aligned here (it was approximate in some of last year's plots). The vertical grey lines mark one-minute intervals; the TR was 1.2 seconds. The tick marks show task onset; each run had three blocks of a verbal-response Stroop task.

First, here is a run without a headcase (normal packing). The difference in raw respiration amplitude between rest and task blocks is clear, as is some drifting over the course of the run. The y and z regressors closely match the respiration trace; hopefully you can zoom in to see that the y, z, and respiration curves are in phase - if the respiration curve goes up, both the y and z lines also go up. This was the case for all AP (anterior-posterior) encoded runs.

Next, here is a run of the same task and encoding (AP), with the very tight headcase. The oscillations in the y and z are still tightly matched to the respiration and about the same amplitude as before, but the drifting and rotation is quite reduced.

Finally, here is the same task, but the looser Caseforge headcase, and the reverse encoding (PA). The rotation is perhaps a bit more than with the tight headcase, but overall drift is quite low. The magnitude of the y and z oscillations is again about the same as the previous plots. If you look closely, the y line is out of phase from the respiration and z lines: the z line still goes up when the respiration goes up, but the y goes down.

We ran other tests, including some breath-holding. This is about two minutes of an AP and PA run breath-holding segment. The y-axis flipping is hopefully easier to see here: the blue peaks match the respiration peaks with AP, but fall in between on PA. 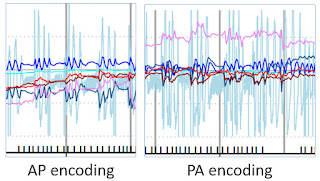 If any of you have thoughts, or would like to look at these datasets to run additional tests, please let me know.