I've been using the afni 3dDetrend command on datasets lately, but realized that I wasn't sure of the exact way the normalization and detrending was calculated. To help me understand (and reproduce the results on files that aren't easily read by afni), this post gives R code to match 3dDetrend output, plus shows some examples of how various normalizing and detrending schemes change timecourses (there's more in the knitr and pdf than shown in this post; files below the jump).

First, we need some data. I picked a run from a handy preprocessed dataset (it doesn't really matter for the demo, but it's from multibandACQtests), then ran the image through afni's 3dDetrend command twice: once with the options -normalize -polort 0, then with -normalize -polort 2. This gives three images, and I picked a voxel at random and extracted its timecourse from each image. Code for this step starts at line 22 of the knitr file (below the jump), and text files with the values are included in the archive for this post.

Here is the voxel's "raw" timecourse: after preprocessing (the HCP pipelines, in this case), but before running 3dDetrend:

And here is the same voxel's timecourse, from the image after 3dDetrend -normalize -polort 2: centered on zero, with the shift of baseline around TR 50 reduced a bit.

From the afni documentation, 3dDetrend -normalize "Normalize[s] each output voxel time series; that is, make the sum-of-squares equal to 1." Note that this is not what R scale() does by default (which is to mean 0 and standard deviation 1; see the full demo for a comparison). Line 113 of the demo code does the afni-style normalization: (tc.raw - mean(tc.raw)) / sqrt(sum((tc.raw - mean(tc.raw))^2)), where tc.raw is a vector with the voxel's timecourse.

For the -polort 2 part, the afni documentation says: "Add Legendre polynomials of order up to and including 'ppp' in the list of vectors to remove." I used the functions from Gregor Gorjanc's blog post (thanks!) and the R orthopolynom package for this; the key part is line 140: residuals(lm(tc.raw ~ seq(tc.raw) + Legendre(x=seq(tc.raw), n=1) + Legendre(x=seq(tc.raw), n=2))). The two Legendre function terms (n=1 and n=2) are to match -polort 2; more (or fewer) terms can be included as desired.

In a previous tutorial I showed how to plot volumetric NIfTI images in R and knitr. Here, I give functions for plotting surface GIfTI brain images in R. If you're not familiar with surface images, this and this post may be useful. Please cite if you find this useful.

This uses the R gifti package (thank you, John Muschelli!) to read the GIfTI images, and the plot3D package for the plotting. It is possible to plot interactive 3d images in R (see for example, the gifti package vignette), but static images are more useful for the application I have in mind: batch-produced knitr files of surface (afni) GLM results.

Here is the first part of the knitr file produced in this tutorial; the full pdf can be downloaded here:

The "blobs" are F-statistics from a GLM targeting right-hand button pushes, so the peaks in left motor areas are sensible. The underlay surfaces are the "inflated" images from the HCP 1200 Subjects Group Average Data release; download here. The code requires you to have underlay surfaces and statistics to overlay in perfect agreement (the same number of nodes, same triangle connections, etc.), but this is a general requirement for surface plotting or analysis. 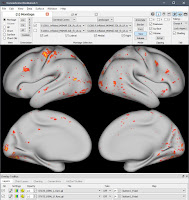 The gifti-plotting function I wrote displays the medial and lateral views, with hot colors for positive values and cool colors for negative. The function takes the positive and/or negative color scaling limits, with values closer to zero than the minimum value not shown, but those above the maximum plotted in the maximum color. This behavior is conventional for neuroimaging; for example, this is the same image, plotted in the Connectome Workbench with the same color scaling.

Full code for the demo is below the jump (or downloaded here). To run the demo you will need the two gifti overlay images, which can be downloaded here (left) and here (right), as well as the HCP 1200 underlay anatomies (see above). If you don't want to run the code within knitr the relevant functions can be separated from the latex sections, but you will need to set the image sizing and resolution.

Please let me know if you find this code useful, particularly if you develop any improvements!

UPDATE 20 July 2018: Fixed the plot.surface function to display the entire range (not truncated) in the lower right note.

UPDATE 7 September 2018: Another fix to plot.surface() to truncate the heat.colors() range so that the top values are plotted in yellow, rather than white, which wasn't very visible.

Also, Chris_Rorden posted a python and Surfice version on Neurostars.

UPDATE 9 January 2019: Added a which.surface term to the plot.surface function, specifying whether plotting HCP or fsaverage5 surfaces. The default is HCP, for backward compatibility.