What is a support vector machine?

This is one of the most readable, non-mathematical introductions to SVMs I've ever run across in the literature. He uses microarray data for the example, but replace "measured mRNA expression level" with "BOLD activation" and the situation is pretty much the same as in MVPA.

He includes a description of what it means to have a soft (or hard) margin; I'll add that the conventional c=1 used with linear classifiers for MVPA corresponds to a fairly soft margin: many training points are allowed to be on the 'wrong' side of the decision boundary.

Jiaxiang Zhang kindly responded to the questions and comments in my previous post, and gave permission to excerpt and summarize our conversation here. Quotes from Jiaxiang are in courier font.

Quite a bit of my commentary was about the ROI creation process. Jiaxiang said that my outline was essentially correct, and provided some additional details and clarification. To make it a bit more readable, here's a new version of the "ROI creation" section from the previous post, answering my questions and adding in his corrections and responses.


The main univariate analysis (Figure 3A and Table 1) used a FWE-corrected threshold (p<0.05). For ROI definition, a common uncorrected voxelwise threshold (p<0.001) was used, which is more liberal for subsequent MVPA. The cluster extent had very limited effects here, because all the ROIs were much larger than the extent threshold.

We defined the grey-matter ROIs on a cortical surface (in Freesurfer), and then transformed back to the native space in NifTI format (which can be loaded into the Princeton MVPA toolbox).

I asked if they'd had better results using Freesurfer than SPM for the spatial transformation, or if there was some other reason for their procedure.

This is an interesting issue. I have not directly compared the two, but I would guess the two methods will generate similar results.

We have not tried to use all ROI voxels, because ROIs have different sizes across regions and subjects (e.g., V1). I think it is more appropriate (debatable) to fix the data dimensions. A fixed number of voxels after the feature selection for each participant and each ROI was used, to enable comparisons across regions and participants. 120 voxels were chosen because it was (roughly) the lower limit of all 190 individual ROI’s sizes (19 participants * 10 ROIs). 2 out of the 190 individual ROIs were smaller than 120 voxels (108 and 113 voxels, respectively), for which we used all voxels in that region.

Several of my previous comments were about what, for lack of a better term, I'll call "ROI stability": were (pretty much) the same 120 voxels chosen across the cross-validation folds within each person, classification, ROI)? Here is our email exchange:

(my reply:) That is interesting! Unfortunately, I don't know of any "established" methods to evaluate stability in ROI definition procedures like this; yours is the only one I can think of that used a fold-wise selection procedure. Did you look at the location of any of those voxel categories - e.g. are the "bad" voxels scattered around the ROIs or clustered?


I do not see consistent spatial patterns on voxel categories.

I think this idea of stability, both how to measure it and how to interpret different degrees (e.g. what proportion of the voxels should be selected in each fold for a ROI to be considered stable?), is an interesting area and worthy of more attention.

My questions about significance testing were more general, trying to understand exactly what was done.

First, about the group-level permutation testing for the ROI analyses:


For each of the 5000 permutations (in each participant and each ROI), classes in the training and test sets were relabelled, and the permuted data was analysed in the same procedure as the observed data. The order of the relabeling in each permutation was kept the same across participants. All the permuted mean accuracies formed the null distributions and were used to estimate the statistical significance of the observed classification accuracy.

If I understand, is this similar to the "scheme 1 stripes" in http://mvpa.blogspot.com/2012/11/permutation-testing-groups-of-people.html? In other words, you didn't bootstrap for the group null distribution, but rather kept the linking across subjects. Concretely, you calculated 5000 group-level averages for the null distribution, each of the 5000 the across-subjects average after applying the same relabling scheme to each participant. This method of doing the group-level permutation test seems quite sensible to me (when possible), but I haven't run across many examples in the literature.


Yes. Your blog post is clearer on describing this method!

How to concisely (but clearly) describe group-level permutation schemes (not to mention the impact of choosing various schemes) is another area worthy of more attention.

Next, I'd wondered how the comparisons were made between the searchlight and ROI-based results.


The peak coordinates from searchlight analysis fall within the functional ROIs in PMd, PMv and IPS. I think the similarity between the two analyses, as claimed in our paper, should not be interpreted as “equality” in terms of the blob’s shapes and extents, but their approximate anatomical locations. The two types of analysis are complementary and are based on different assumptions. The searchlight assumes that information is represented in multiple adjacent voxels (as shown in searchlight “blobs”), while the ROI analysis assumes that information is distributed within a spatially bounded region. Therefore, unless a ROI is directly defined from searchlight results, significant classification accuracy in one ROI does not necessary imply that a searchlight blob would perfectly match the spatial distribution of that ROI.


I absolutely agree that searchlight and ROI-based analyses are complementary, based on different assumptions (and detect different types of information), and shouldn't perfectly overlap. Having the 'peak' searchlight coordinate fall into particular ROIs is a reasonable way to quantify the similarity. This is another area in which there is unfortunately no standard comparison technique (that I know of); I could imagine looking at the percent overlap or something as well.

I'd asked three questions at the end of the previous post; here are answers from Jiaxiang for the first two (the third was answered above).


The PEIs for both chosen and specified trials were used in that ROI analysis (no new PEIs were created).

So there were twice as many examples (all the chosen and all the specified) in the pooled analysis as either context alone.

So new PEIs were made, including just the decision time stage or just the maintenance stage?

The new first level model for cross-stage classification include both decision and maintenance stages, as in the main model.


A fascinating study (and methods); thanks again to Jiaxiang for generously answering my questions and letting me share our correspondence here!
Posted by Jo Etzel at 7:42 PM No comments:

Back in June I shared the story of some headaches caused by inconsistent indexing: R (oro.nifti) and MRIcroN are 1-based, while python is 0-based. I later added SPM (1-based) and afni (0-based) to the collection; now, a kind person contributed images from doing the same test in FSL and caret: they are both 0-based.

As the person who sent the images wrote (I'm assuming wryly), ".... 'proper' programming languages (python, C) start counting/indexing from 0, while maths based applications like R and Matlab start from 1."

And the same (0-based) is the case in caret, as shown in these images: 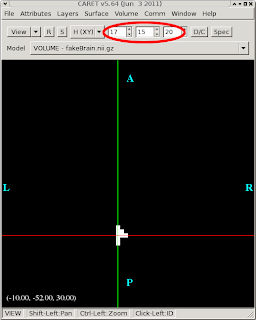 Email ThisBlogThis!Share to TwitterShare to FacebookShare to Pinterest
Labels: NIfTI

"Choosing the Rules: Distinct and Overlapping Frontoparietal Representations of Task Rules for Perceptual Decisions" has interesting combinations of ROI-based and searchlight analyses. I think I figured out a lot of the methods, but all of the steps and choices were not clear. Frustratingly, why some of the thresholds were set as they were (e.g. for ROI definition) was not explained. Were these the only values tried? I tend to keep an eye out for explanations of why particular choices were made, especially when not "standard", aware of the ongoing discussions of problems caused by too many experimenter degrees of freedom. Few choices can really be considered standard, but I must say I look for more of an explanation when reading something like "the top 120 voxels were selected in each ROI" than "we used a linear SVM, c=1, libsvm package". 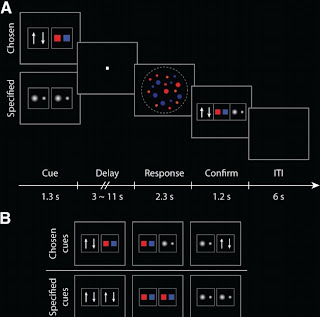 As usual, I'm going to focus on analysis details rather than the theoretical motivation and interpretation, but
here's a bit of introduction.

The task design is shown at right (Figure 1 from the paper). The top shows what the subject saw (and when): first, a screen with two identical (or not) task cues, then a delay, then a moving-dot stimulus, then they responded and indicated which cue (rule) they'd used to make the response.

The moving-dot stimuli always were similar, but the response the subjects were supposed to make (which button to push) depended on the rule associated with each  of the three cues (respond to dot size, color, or movement direction). Additionally, two cues were always presented simultaneously, but sometimes ("specified context") the same cue was shown twice (in which case the participant was to perform that rule), while other times (the "chosen context") two different cues were shown (in which case the participant was to pick which cue of the two they wanted to follow).

To summarize, we're interested in distinguishing three rule cues (motion, color, size), across two contexts (specified and chosen). The tasks were in eight runs, with 30 trials in each run. The cue and contexts were in random order, but with full balance within each run (5 repeats of each of the 2 contexts * 3 cues).


The classifications were of three main types, each of which was carried out both in ROIs and searchlights:

I was intrigued by how they defined the ROIs (other than BA17, which was from an anatomical atlas). Here's my guess at what they did; I'm not sure I figured out all the steps.
I could find no mention of the stability of these final 120 voxels, nor of what proportion of starting ROI voxels 120 is, nor of why these particular thresholds were chosen (and if any others were tried).

It is proper to do the feature selection on the training set only, but interpretability might be affected if stability is low. In this case, they did leave-one-run-out cross-validation with eight runs, making eight versions of each ROI for each person. If these eight versions are nearly identical, it makes sense to consider them the same ROI. But if 120 voxels is something like 1/10th of the starting voxels, and a different tenth is chosen in each of the eight versions, shouldn't we think of them as eight different ROIs? Unfortunately, stability is not addressed in the manuscript, as far as I can tell.

a few other comments


Update (22 August 2013): Jiaxiang Zhang answered my questions and corrected a few parts of this post here.

Zhang J, Kriegeskorte N, Carlin JD, & Rowe JB (2013). Choosing the rules: distinct and overlapping frontoparietal representations of task rules for perceptual decisions. The Journal of neuroscience : the official journal of the Society for Neuroscience, 33 (29), 11852-62 PMID: 23864675
Posted by Jo Etzel at 5:14 PM No comments:

The call for papers for the 1st International Workshop on High Dimensional Data Mining (HDM 2013) ends on 17 August 2013. Not directly about MVPA, but we certainly should be interested in how to work with high dimensional data!
Posted by Jo Etzel at 1:52 PM No comments: