Lately I've been working a bit with the brain parcellation map described in Gordon, et al. (2014), "Generation and Evaluation of a Cortical Area Parcellation from Resting-State Correlations" (citation below), which is available from the authors (thanks!) in both surface and volumetric formats.

This is not the first functional connectivity-derived brain parcellation (Table 1 of the paper lists others), but I think is probably the most methodologically rigorous to date. I like that they used two datasets, each with more than 100 people, and serious quality control checks (motion, etc). I also like their reliability/stability/validity analyses: both between the two datasets, in individuals, and against the most robust and best understood atlases (including cytoarchitechtonic).

We'd like to use the parcellation for defining ROIs, particularly for frontal and parietal areas that aren't definitively divided in existing atlases. Gordon et al. did their analyses on the surface, but provide both surface (CIFTI) and volumetric (NIfTI) versions of the parcellation.

Here's an image I made (using a version of my knitr plotting code) showing a few slices the volumetric parcels (plotted on a conte MNI anatomy I resampled to 2x2x2 mm voxels to match the parcellation's resolution). As is apparent, while in volumetric space, the parcels closely follow the cortical surface (grey matter ribbon).

I see the logic of constraining analyses to the surface, particularly when fMRI images are acquired with high-resolution imaging and then subjected to precise, surface-optimized preprocessing (such as in the HCP). But I'm less convinced these narrow ROIs are advantageous for datasets collected with larger voxels (say 3x3x3 mm or larger) and "standard" preprocessing (such as SPM and spatial normalization). 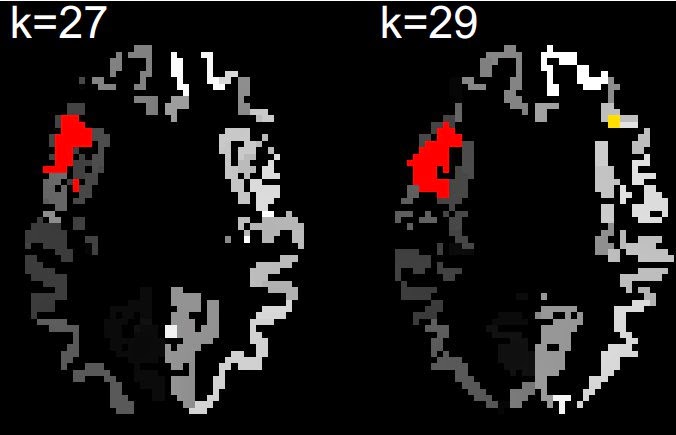 For example, here are a few slices showing some of the validated ROIs from my recent paper overlayed on a few greyscale slices from the Gordon et al. parcellation. My dataset was acquired with 4x4x4 mm voxels, and all preprocessing was volumetric. The red ROI in the image at left was defined using a volumetric searchlight analysis, and, unsurprisingly, is rather "blobby:" it's not constrained to the cortical ribbon. The red ROI contains 416 voxels, of which 181 (.43) are in one of the parcels. Does that mean the 235 non-parcel voxels are uninformative? No. With 4x4x4 mm voxels, typical amounts of movement, and preprocessing which included spatial normalization, some of the BOLD, even if it all actually came from the grey matter, will appear to come from outside the cortical ribbon.

To summarize, my take is that this parcellation is the result of a methodological tour de force and worth careful consideration, especially for a high-resolution dataset preprocessed with surface analysis in mind (e.g. with freesurfer), even if doing a volumetric analysis. It may be less suitable for datasets with larger voxels and more standard preprocessing.