This is a new introductory knitr tutorial. I have posted two previous knitr tutorials, but this supersedes the first: I have now split the image plotting (NIfTI and GIFTI) into its own tutorial. This post describes setting up RStudio and knitr and compiling the tutorial .rnw, which can be downloaded from the (new!) blog osf site.

I'm a big fan of R and knitr; I now use knitr to create nearly all of my analysis-summary documents, even those with "brain blob" images, figures, and tables. The files can be complex, such as this supplemental information.

This post contains a knitr tutorial in the form of an example knitr-created document, and the source needed to recreate it. My intention is that this will be a "starter kit", containing examples of the basic formatting needed to quickly start using knitr. The file is also a starter kit for base R graphics ... I use base R for nearly everything, rather than ggplot2 or the tidyverse. 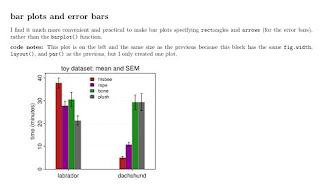 What does knitr do? Yihui has many demonstrations on his web site. I use knitr to create pdf files presenting, summarizing, and interpreting analysis results. Part of the demo pdf is in the image at left to give the idea: I have several paragraphs of explanatory text above a figure. This entire pdf was created from a knitr .rnw source file, which contains LaTeX text and R code blocks.

Previously, I'd make Word documents describing an analysis, copy-pasting figures and screenshots as needed, and manually formatting tables. Besides time, a big drawback of this system is human memory ... "how exactly did I calculate these figures?." I tried including links to the source R files and notes about thresholds, etc, but often missed some key detail, which I'd then have to reverse-engineer. knitr avoids that problem: I can look at the document's .rnw source code and immediately see which NIfTI image is displayed, which directory contains the plotted data, etc.

In addition to (human) memory and reproducibility benefits, the time saved by using knitr instead of Word for analysis summary documents is substantial. Need to change a parameter and rerun an analysis? With knitr there's no need to spend hours updating the images: just change the file names and parameters in the knitr document and recompile. Similarly, the color scaling or displayed slices can be changed easily. 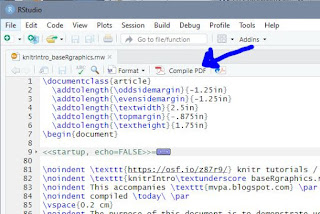 Using knitr is relatively painless: if you use RStudio. There is still a bit of a learning curve, especially if you want fancy formatting in the text parts of the document, since it uses LaTeX syntax (this tutorial contains enough to get going with, though). But RStudio takes care of all of the interconnections: simply click the "Compile PDF" button (blue arrow) ... and it does!

If you haven't already, first install RStudio and then the knitr package (use the GUI or install.packages("knitr")). If you're not using LaTeX already, I suggest installing TinyTeX next, which may be the only LaTeX compiler you need (it seems to vary with operating system; see troubleshooting notes below). TinyTeX is ease to install in R: first the tinytex package (use the GUI or install.packages("tinytex")), then tinytex::install_tinytex(). 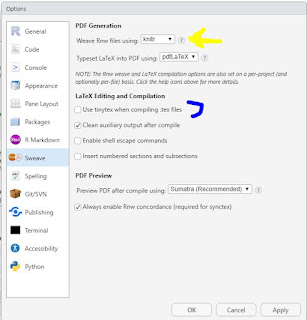 RStudio defaults .rnw files to Sweave, but this tutorial .rnw is in knitr, so you MUST change the RStudio setting. To do this, go through Tools then Global Options in the top RStudio menus to bring up the Options dialog box, as shown here. Click on the Sweave icon, then tell it to Weave Rnw files using knitr (marked with yellow arrow). If you installed tinytex, you should also check the Use tinytex when compiling .tex files box (marked with blue).

I suggest you next test if everything is working. Start a blank document by selecting New File -> R Sweave (yes, "Sweave"). Type something between the \begin{document} and \end{document} lines, like shown here. Then save the file with the .rnw suffix; I strongly suggest saving it in an empty directory, as many temporary files will be created during compilation. Finally, click the Compile PDF button, and a new window containing the PDF should appear.

I named the test file test.rnw and saved it in an empty directory, but after compilation the directory has six files: the original test.rnw, the compiled test.pdf, plus test.log, test.syntex.gz, test.tex, and test-concordance.tex. (When compiling files with images a subdirectory with image files will also be created; enabling caching will lead to another subdirectory.) Only the .rnw and .pdf files need to be kept; every time the .rnw is compiled all the same other files will be recreated.

If the test file compiled successfully, you can try the base R graphics demo: download knitrIntro_baseRgraphics.rnw from the osf site, save it locally into its own directory, compile it, and you should have a pdf very similar to the one I posted.

Starting with a very simple test document (like my hello world example above) is a good way to determine if the problem is with the knitr/R/LaTeX installation or a particular file. Invalid LaTeX code (e.g., _ instead of \textunderscore) or invalid R syntax (e.g., x <- c(1,);) can make odd error messages, but will only affect individual files.

The RStudio default for .rnw must be changed to knitr (see above); if it is not the file will not be compiled, plus some strange side effects. Error messages may include "LaTeX Error: File `ae.sty' not found." and "==> Fatal error occurred, no output PDF file produced!". Also, at least one \SweaveOpts line is usually added to the source .rnw, such as below. To correct, you must both change the global options to knitr AND delete all lines of code starting with \Sweave from your source file.

Sometimes it seems necessary to install MiKTeX (set it to 'Always install missing packages on-the-fly') as well as tinytex. If you have suggestions for which operating systems/situations require more than tinytext, please share them.

UPDATE 7 April 2020: added the note about needing MiKTeX as well as TinyTeX.

UPDATE 5 November 2020: added a link to the knitr tutorial on surface and volume brain image plotting.