This is the third post in a series describing the DMCC55B supplemental files. The first introduces the dataset, and the second the questionnaire data. Here I'll highlight the first in the set of basic fMRI QC files: looking at the realignment parameters (head motion).

While we use an FD threshold for censoring during the GLMs, I think plots with the six separate parameters are more useful for QC. These plots make up the bulk of QC_motion.pdf; one for each functional run included in DMCC55B. Chunk code5 of QC_motion.rnw creates these plots directly from the _desc-confounds_regressors.tsv produced during fmriprep preprocessing (note: newer versions name this file _desc-confounds_timeseries.tsv, but the columns used here are unchanged), and is relatively straightforward to adapt to other datasets; the code chunks between startup and code5 produce group summary statistics and can be omitted. 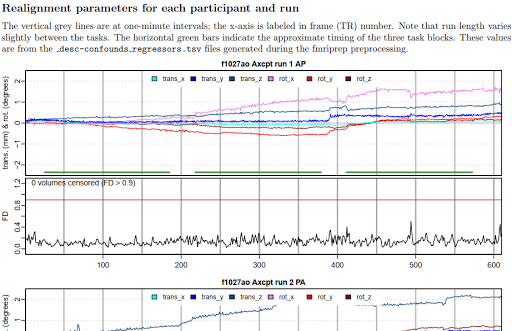 Above is the top of page 5 of the compiled file, including the motion plot for the first run. This shows very little overt or apparent motion, just a slight wiggle around frame 400 (8 minutes; grey lines are 1 minute intervals), which suggests they shifted during the break between the second and third task blocks (green horizontal lines). This run would be given an "A" (top) grade in our qualitative assessment.

f1659oa has extremely low overt head motion across this run, but clear apparent motion (breathing), primarily in the dark blue trans_y line.
R note: These motion (and the other) plots are made with base R graphics in a knitr document. The "stacked" 6-parameter and FD plots are made by using three par() commands within each iteration of the loop (chunk code5): first the size and margins for the upper plot; second the size and margins of the lower plot, with new=TRUE; finally, setting new=FALSE to finish and reset for the next run.
Posted by Jo Etzel at 4:31 PM