This is the sixth (and I believe final) post in a series describing the DMCC55B supplemental files. The first introduces the dataset, the second questionnaire data, the third motion, the fourth creating and checking temporal mean, standard deviation, and tSNR images, and the fifth a parcel-wise button-press classification analysis.

As discussed in the manuscript and the introduction to the previous post, "ONs" is a positive control analysis: one that is not of experimental interest, but has a very predictable outcome; so predictable that if the expected result is not found, further analysis should stop until the problem is resolved. "ONs" is shorthand for "on-task": contrasting BOLD during all task trials against baseline..

The example DMCC55B ONs analysis uses the Stroop task and direct examination of the parcel-average timecourses for HRF-like shape, rather than the GLMs we use for internal QC. This has the advantage of being very close to the data with few dependencies, but is only perhaps practical when there are many repetitions of short trials (such as the DMCC Stroop). The DMCC Stroop task is a color-word version, with spoken responses. Contrasting task (all trials, not e.g., by congruency) against baseline should thus show activity in visual, language, and motor (especially speaking) areas; the typical "task positive" and "task negative" areas.

As for the "buttons", both a surface and volume version of the analysis are included, and the results are similar. The first step of the analysis is the same as for buttons: normalize and detrend each vertex/voxel's timecourse using 3dDetrend (the first code block of controlAnalysis_prep.R and controlAnalysis_prep_volume.R processes both Sternberg and Stroop). The rest of the steps are brief enough to be in the knitr code chunks: make parcel-average timecourses with 3dROIstats, use the _events.tsv files to find the onset of each trial for each person, and average the timecourse across those events.

For example, here are the timecourses for two motor parcels (113 and 116 in the 1000-parcel, 17-network Schaefer parcellation), surface (top) and volume (bottom): 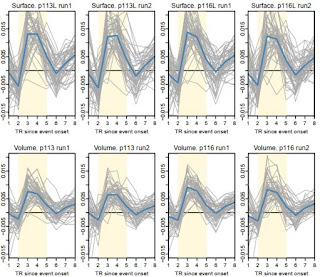 Each grey line is one participant, with the across-participants mean in blue. The x-axis is TRs (1.2 second TR; event onset at 0), and the y-axis is BOLD (parcel-average after the normalizing and detrending, averaged across all events for the person). As expected, the curves approximate the canonical HRF. Interestingly, the surface timecourses are taller than the volume, though the same parcels tend to show task-related activity (or not).

To summarize further and show all the parcels at once, I averaged the BOLD across the peak timepoints (yellowish band), which makes the areas clear in the group means:

Please let me know if you explore the DMCC55B dataset and/or this supplemental; I hope you find these files useful!
Posted by Jo Etzel at 4:59 PM